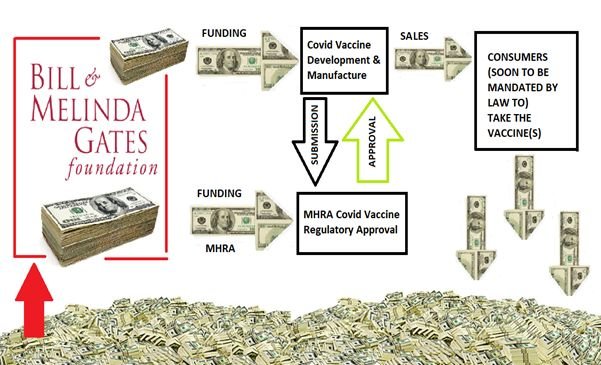 But for anyone that cares to look the MHRA has clear financial conflicts of interest in the matter of Regulatory approval of Covid-19 vaccinations that should be deeply concerning for all.  It is no secret that Bill Gates has had a hand in funding the development and manufacture of Covid-19  vaccines but what will come as a huge surprise to many is that he also has financial ties to the UK’s MHRA, the entity responsible for regulatory approval of those same vaccines for use on the UK population. The Covid-19 business model, Bill Gates financial Magnus Opus,  displays grand scale joined up thinking that is the most lucrative business model ever imagined and it works like this:  If Governments worldwide mandate their respective citizenries to take these Gates-funded vaccines at least once annually (and some suggest taking all three vaccines multiple times a year) then Gates has a  potential captive market of billions of people with guaranteed repeat sales annually and if Bill Gates buys off the regulators then he is sure to get his products to market. Moreover, troublesome stories from the MSM will not be a problem because Gates also pours enough money into those to secure their editorial bias in his favour. Therefore none of them will run the story that MHRA are expecting a tidal wave of adverse reactions from Covid-19 vaccines. Such serious allegations require incontrovertible evidence so let us immediately consider the proof:

FACT #1 : When Bill Gates awarded lucrative contracts to the MHRA, the Government body responsible for  assessment of the safety and efficacy of the vaccines and the power to confer regulatory approval for their use he compromises the independence of the regulators as they essentially join the Bill Gates payroll

EVIDENCE   (2): The MHRA’s own website announces in press release that it has received Government funding to collaborate with Bill & Melinda Gates Foundation and if that were not enough of a conflict of interest we have….

EVIDENCE   (3): Sir Michael Rawlins, Chairman of the MHRA is also on the payroll of Bill Gates for his work as chairman of UK Biobank’s Board (an Organisation funded by the Wellcome Trust that is (you guessed it) funded by the Bill & Melinda Gates Foundation.

FACT #2: Bill Gates has heavily funded the development of all three of the main Covid-19 vaccination manufacturers.

have established strategic alliances with leading biopharmaceutical companies, including AstraZeneca, Merck & Co., and Vertex Pharmaceuticals, as well as government-sponsored and private organizations focused on global health initiatives, including Biomedical Advanced Research and Development Authority, or BARDA, Defense Advanced Research Projects Agency, or DARPA, and the Bill & Melinda Gates Foundation. As of September 30, 2018, we have raised over $2.6 billion in total funding from our strategic collaborators and investors, and have cash, cash equivalents, and investments of $1.2 billion. As we unlock the inherent

FACT: 3: The mainstream media generally don’t focus on Bill Gates financial conflicts of interest with the MHRA because Gates also funds the media and thereby controls their editorial bias:

Up to June of 2020, Bill Gates has ploughed no less than $250 million in foundation grants into mainstream journalism. Takers include BBC, NBC, Al Jazeera, ProPublica, National Journal, The  Guardian, Univision, Medium, Financial Times, The Atlantic, Gannett News, and Le Monde – to name only a few. Many other mainstream outlets are pocketing money for ‘contracts’ they have with the Gates Foundation, including Vox.

SEE ALSO: The Bill and Melinda Gates Foundation’s sponsorship of The Guardian

What the Government do not want you to consider regarding Covid-19 vaccines:

HARD EVIDENCE: The rush to bypass clinical trials and approve a Covid-19 vaccine:

BIG PHARMA ignoring pesky patient safety concerns: stays focussed on BIG MONEY instead. Would you take this very soon to be Government-mandated Bill Gates funded vaccine? Would you give it to a family member?

And everything really is fine despite:

And everything remains fine even in the face of

During the first week of vaccine rollout in the UK the predictable happened: Two NHS staff suffer anaphylactoid reaction from Pfizer Covid Vaccine

The UK is expecting a tidal wave of adverse reactions to Covid Vaccines:

Would your Granny survive anaphylactic shock brought on by reaction to a Covid-19 vaccine?

The State sponsored plan to kill off the elderly –

The two NHS nurses that suffered anaphylactic shock upon administration of the Covid-19  were much younger and therefore had greater health resilience than the elderly residents of care homes, but worldwide Government plans that such residents, the most frail and vulnerable to illness in society, will be the first to be vaccinated.

“Anaphylaxis is a severe, potentially life-threatening allergic reaction. It can occur within seconds or minutes of exposure to something you’re allergic to….Anaphylaxis causes your immune system to release a flood of chemicals that can cause you to go into shock — your blood pressure drops suddenly and your airways narrow, blocking breathing…Anaphylaxis requires an injection of epinephrine and a follow-up trip to an emergency room. If you don’t have epinephrine….If anaphylaxis isn’t treated right away, it can be fatal.

And it’s the same story in the UK

Stephen Donnelly has indemnified the pharmaceuticals against potential lawsuits arising from vaccine adverse reactions so Big Pharma don’t care how many citizens are killed or injured but Irish Citizens may lose everything they have trying to fight for justice for their vaccine damaged relatives through the courts.

State indemnity of pharmaceuticals can be read here in the Irish Times https://archive.vn/tJmOw

Evidence of the absence of a free press in Ireland is that this information is subsequently removed in this version of the same article: https://archive.vn/LASXc

No animal testing – what could possibly go wrong?

Moderna’s Covid-19 Vaccine trials skipped animal testing in the name of fast tracking vaccine approval. Should the public be concerned? Damn right they should: in an article on the Ecologist we read:

“The most forward-thinking coronavirus researchers are forgoing cruel and archaic tests on animals in favour of cutting-edge human-relevant methods.

The US National Institutes of Health (NIH) decided to speed up the development of a possible vaccine by bypassing a lengthy animal testing phase in favour of testing it directly in humans. While some tests on animals were still involved in this case, NIH’s decision is a huge step towards safe, straight-to-human vaccine trials in the future.

This shift in thinking is long overdue. NIH reports that 95 percent of drugs that pass animal tests fail in human trials because they are either unsafe or ineffective. Mice – who have to be genetically engineered just to be susceptible to COVID-19 – show only mild symptoms of the disease.

Meditate on the statement highlighted in yellow for a moment:

95% of all vaccines that have been tested on animals first don’t make it to humans because they are either unsafe of ineffective. i.e. only 5% of new vaccines are deemed safe and / or effective for use on humans.

Viewed through this lens, the decision by the National Institute for health researchers to go straight to human testing with a 95% chance of disaster is reckless endangerment of the health of people with a 99.99% of survival of Covid-19 according to official CDC data.

Final Question: Do you want to take a vaccination against a disease you have a 99.99% chance of surviving simply to line Bill Gates pockets while risking death or serious health complications from the vaccine itself?