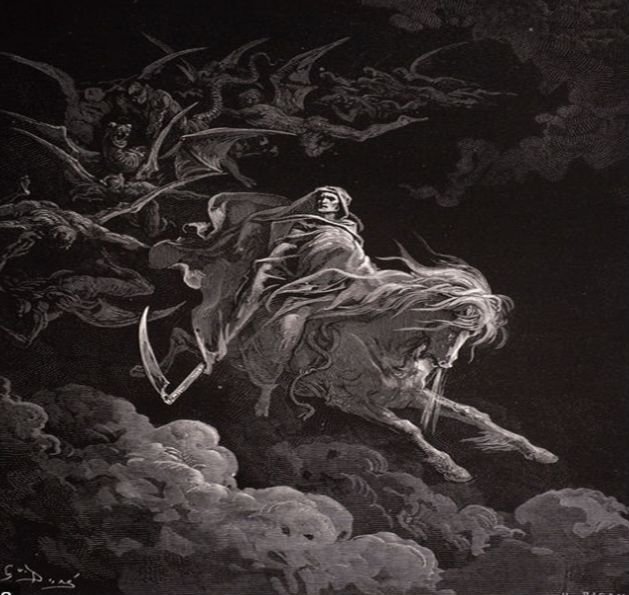 Irish churches have seen weekly attendances fall to record lows and the Catholic church in particular breathes life into Jean Paul Sartre’s maxim that Christianity is a soul laundering operation devoid of soap since the death of the first Christian. The future of Christianity as a going concern in Ireland looks shaky at best. Very few seem willing to find a vocation in clerical life; ordinations of new priests are now at a trickle but as it so happens, this was all prophesied to happen.

Reader’s Question: Who cares? And what on earth has all of this got to do with Covid-19?

Truth-Watch.Today’s Answer: Hang on to your seat because you are in for one hell of a ride: The Biblical connections to Covid-19 is a follows:

“How you are fallen from heaven, O Day Star, son of Dawn! How you are cut down to the ground, you who laid the nations low!

“If any man hath an ear let him hear…and he causeth all, both small and great, rich and poor, free and bond, to receive a mark in their right hand, or in their foreheads: And that no man might buy or sell, save he that had the mark, or the name of the beast, or the number of his name. Here is wisdom. Let him that hath understanding count the number of the beast: for it is the number of a man; and his number is 666”

and the chapter continues describing the fate of someone who takes the mark of the beast:

“He also will drink the wine of God’s wrath, poured full strength into the cup of his anger, and he will be tormented with fire and sulfur in the presence of the holy angels and in the presence of the Lamb. And the smoke of their torment goes up forever and ever, and they have no rest, day or night, these worshipers of the beast and its image, and whoever receives the mark of its name.”

The zeitgeist of the end of days as related in the prophecy of Timothy is an excellent fit for the present era when we consider the culture of so called Instagram influencers and celebrity culture such as the Kardashians etc. and the unchecked narcissism and personal hedonism that they represent:

Timothy 3:1-5: “In the last days . . . , men will be lovers of themselves, lovers of money, boastful, haughty, blasphemers, disobedient to parents, unthankful, disloyal, having no natural affection, not open to any agreement, slanderers, without self-control, fierce, without love of goodness, betrayers, headstrong, puffed up with pride, lovers of pleasures rather than lovers of God, having an appearance of godliness but proving false to its power.”

Daniel 12:4 Many will roam about, and knowledge will increase.

The letter of St. Paul to the Thessalonians indicates that Jesus Christ’s return to earth will not happen until a great falling away from the Christian faith has occurred first and goes on to indicate that God will send a powerful delusion so that most will believe the lie. The first part of this prophecy has already happened: i.e. the peoples that populate the lands formerly known as Christendom today are predominantly secular and the majority do not adhere to any religious faith. As to the second part concerning the strong delusion – The Covid-19 hoax certainly fits the bill, i.e.  “a strong delusion” / a great deception that most believe. Never in the history of mankind has the human race been deceived on a global scale as the deception of the Covid hoax. The exact verses from Thessalonians are as follows:

1Now, brethren, concerning the coming of our Lord Jesus Christ and our gathering together to Him, we ask you, 2not to be soon shaken in mind or troubled, either by spirit or by word or by letter, as if from us, as though the day of [a]Christ had come. 3Let no one deceive you by any means; for that Day will not come unless the falling away comes first, and the man of [b]sin is revealed, the son of perdition, 4who opposes and exalts himself above all that is called God or that is worshiped, so that he sits [c]as God in the temple of God, showing himself that he is God.

5Do you not remember that when I was still with you I told you these things? 6And now you know what is restraining, that he may be revealed in his own time. 7For the [d]mystery of lawlessness is already at work; only [e]He who now restrains will do so until He is taken out of the way. 8And then the lawless one will be revealed, whom the Lord will consume with the breath of His mouth and destroy with the brightness of His coming. 9The coming of the lawless one is according to the working of Satan, with all power, signs, and lying wonders, 10and with all unrighteous deception among those who perish, because they did not receive the love of the truth, that they might be saved. 11And for this reason God will send them strong delusion, that they should believe the lie, 12that they all may be condemned who did not believe the truth but had pleasure in unrighteousness.

“Eventually we will have some digital certificates to show who has recovered or been tested recently or when we have a vaccine who has received it.” (Bill Gates]

The ‘digital certificates’ Gates was referring to are human-implantable ‘QUANTUM-DOT TATTOOS’ that researchers at MIT and Rice University are working on  as a way to hold vaccination records. It was last year in December when scientists from the two universities revealed that they were working on these quantum-dot tattoos after

(ask yourself this question: “in the pre-covid era, for whom was identifying who has been / has not been vaccinated a problem? Answer: No one except Bill Gates….read on you’ll see why and the true reason has nothing to do with people’s health

Quantum Dot tattoos use an enzyme called “Luciferase” which is described thus by Wikipedia:

“Luciferase is a generic term for the class of oxidative enzymes that produce bioluminescence, and is usually distinguished from a photoprotein. The name was first used by Raphaël Dubois who invented the words luciferin and luciferase, for the substrate and enzyme, respectively.

Luciferases are widely used in biotechnology, for microscopy and as reporter genes, for many of the same applications as fluorescent proteins. However, unlike fluorescent proteins, luciferases do not require an external light source, but do require addition of luciferin, the consumable substrate.” – Source: https://en.wikipedia.org/wiki/Luciferase

The Bill Gates funded Quantum dot tattoos show evidence of vaccination provided by means of a “light-bearer enzyme” called Luciferase and it works like this:

And the documentary on all of that is quite something

A mark is placed on the person by means of a [Bill Gates developed and owned] quantum dot tattoo that is delivered via a microneedle array vaccination that uses a light bearing enzyme called Luciferase to show vaccination status. This vaccination status can also be used as a biometric ID (i.e. “a mark”) that can link the person to a cryptocurrency (that “no man can buy or sell without”) system (as described in Microsoft patent no. 060606 ) that will find application in a cashless society.

“and he causeth all, both small and great, rich and poor, free and bond, to receive a mark in their right hand, or in their foreheads: And that no man might buy or sell, save he that had the mark, or the name of the beast, or the number of his name. Here is wisdom. Let him that hath understanding count the number of the beast: for it is the number of a man; and his number is 666”

And here are some documentaries on this vaccine:

The Biblical book of Mathew also describes a feature of the end times that is particularly prescient in light of  the effects Covis-19 vaccinations on pregnant women and nursing mothers:

Matthew 24:19, NIV: “How dreadful it will be in those days for pregnant women and nursing mothers!” . 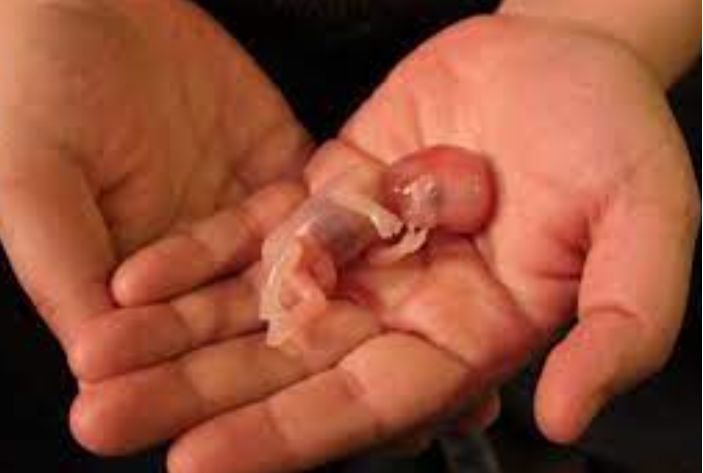 You can see a PDF of that data set here:

The Irish Mainstream media do not cover this miscarriage following vaccination just like they don’t cover the deaths following covid vaccination, but it is happening in Ireland as this Facebook post shows:v

For full details of the effects Covid 19 vaccines are having on pregnancy click here: 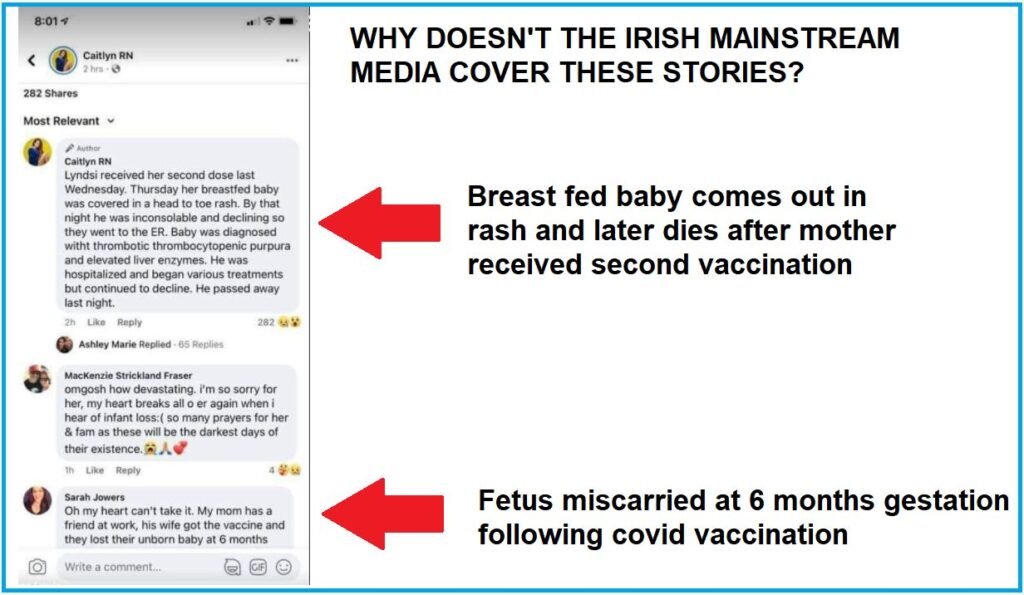 and in this article we read about another breast fed baby that died of blood clots shortly after the mother received the Covid-19 vaccine: https://archive.ph/rGBqR

So in light of the above evidence the big question for all reader is: Are you feeling lucky enough to ignore this?

The Bible lays out your options for you

Option #1: eternal damnation where “the smoke of your torment goes up forever and ever, and you will have no rest, day or night”

Option #2 eternal life gained by non-compliance with the agents of Satan?

Think carefully when choose your side. Ask yourself two questions:

Question #1: Do you stand on the same side as Bill Gates, The WHO, Your Government, The Mainstream Media, the UN?

Question #2: Will you wear the mark they are preparing for you without which you cannot buy or sell?

consider it well because its the most important decision you will ever consider.